Antonio Alonso, a Spanish diplomat who lived in Brussels for a long time, was a modest man yet with a strong character, a keen eye, attentive and always careful not to overdo things, Antonio Alonso had immensely refined and eclectic tastes for things, and most notably for crystals.

An absolute neophyte when it came to crystals, I timidly entered his world of mysterious and dazzling colours and shapes and discovered various eras of an object that can be seen either as an everyday utility, a decoration or, quite simply, as a work of art.

Be it true or not, this legendary extraordinary collection of crystals started in Brussels when his wife, Rosario, went to the Grand Sablon, renown for its antique and second-hand dealers, where she bought a crystal vase as a Christmas gift for her mother.

Back home, Antonio was instantly charmed by the beauty of the object, and asked his wife to discreetly find another one for him to offer as a gift. For Antonio, this would be a real turning point as it would become the beginning of his new passion: collecting glass objects, glass castings and crystals from Belgium, his adopted country, and its century old crafting tradition.

Shortly after, no matter the weather, Antonio spent his week-ends on a quest to find all the antique and second-hand dealers in Hasselt, Tongres, Porte de Clignancourt and Porto Bello. In a time where glass and crystals were not as notorious as they are today, those were the places where dealers would showcase their “merchandise”, which would sometimes be somewhat of a challenge to sell.

This is where the collector’s eye has the opportunity to distinguish the authentic from the fake, the beautiful from the ugly, sublime aesthetics from scum.

Putting together a collection takes time, a lot of time. The collector has to train his eye, research the archives of Europe’s most renowned glassworks, classify his collection in accordance with the various eras and strict rules of the sublime craft of glass-blowing. 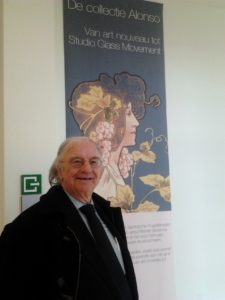